Typically a wine spritzer consists of wine and whatever sparkling water or club soda one has on hand. This one deviates slightly from the traditional recipe by way of the addition of vodka. I’m not really one to drink watered down wine, I spent a good majority of my Sundays growing up doing that and I never acquired a taste for it. I’d like to drink my booze the way Jesus intended, blessed and multiplying. These days I do a little bit of my own blessing of the booze by adding what some might consider a form of “holy water” (or maybe it’s fire water…anyone know any euphemisms for Vodka?) because, let’s be real, wine just doesn’t have enough alcohol in it already. 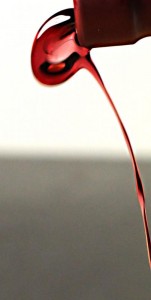 WARNING: One may lose feeling in one’s face after drinking a few of these.

Is anyone here familiar with Sandra Lee, the host of “Semi-Homemade” on the Food Network? It’s okay if you’re not, her meal recipes aren’t exactly note worthy but her super positive attitude and elaborate tablescapes are intoxicating and visually fantastic. Speaking of intoxicating, she’s got quite the reputation for making some pretty stiff drinks as demonstrated by one of my all time favorite clips. I did a bit of Sandra Lee channeling when I created this spritzer, it doesn’t matter how much of what you decide to put in this just as long as you have a good time. If there’s anything I’ve learned from the woman it’s that “two shots of Vodka” is really up to one’s own personal interpretation. 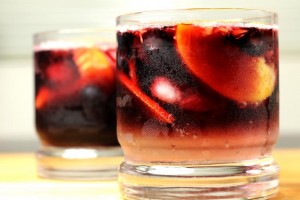 *This was so easy, I simply started off with some ice and fruit in a glass then poured in some grapefruit Perrier I had on hand, topped it off with a shot of vodka and layered the wine on top. I used a Merlot as it’s generally a little more fruity. I can’t tell you just how refreshing and EASY TO DRINK this spritzer was. Two of these down and I started to feel a little better about the heat from Hades’ asshole that has recently consumed Seattle. 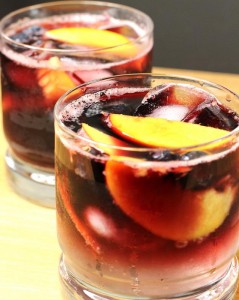